The Akrami family (Azar & Ata) migrated to the United States of America in the late 1970’s. Always known as excellent cooks with a never-ending passion for food, Ata and Azar soon found friends asking to prepare food for small parties and soon after started the business called Ata’s Catering in the early parts of the 1980’s. The word of mouth soon reached the nearby cities to their hometown of Louisville, KY, traveling as far as Washington DC. After a few decades of persistence by friends and foe alike to open a restaurant, Akrami’s sons Ramin and Ashcon finally put a front to a very old family tradition of crazy-good food and then there was born Shiraz Mediterranean Grill.

Babajoon Restaurant in Denver. Babajoon’s – a fresh and healthy Persian/Mediterranean counter service restaurant, where the food is prepared daily with the freshest ingredients on site. Clean food that’s without any chemical preservatives or other flavor enhancing chemicals like MSG. Read more…

Shiraz Cuisine is Watertown. Shiraz Cuisine is an upscale, modern Middle-Eastern restaurant located in Watertown. It is only minutes outside the busy city traffic. Shiraz offers the elegance of a city setting with an intimate ambiance and private parking. Read more… 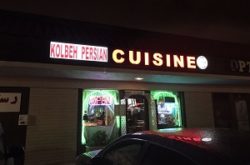 Kolbeh Restaurant in Sand Diego. Kolbeh Persian Restaurant is family owned and operated with the first location opening in 1990. With the goal of bringing great home cooked Persian food into the lives of many San Diegans, we believe that great food starts with excellent ingredients. Read more…